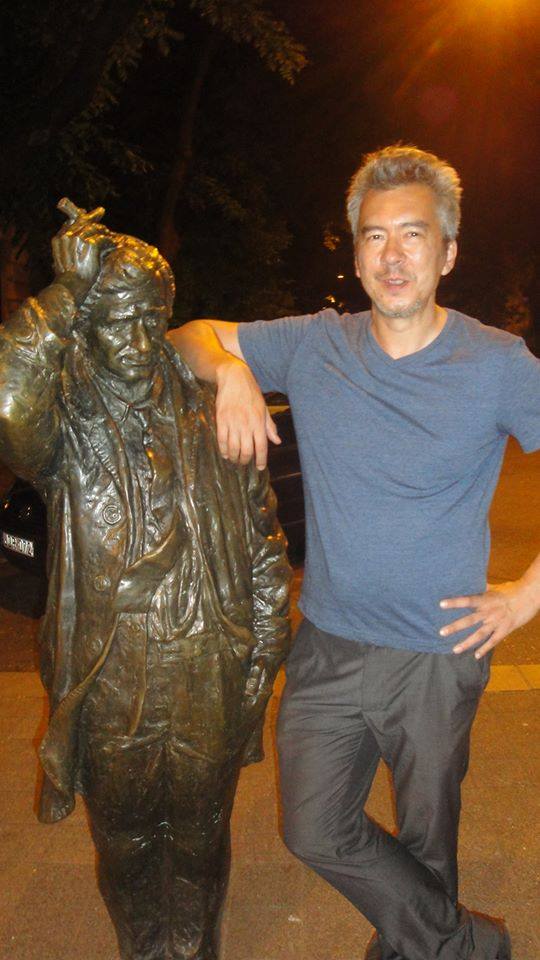 Brian Kim Stefans' most recent book is 'Word Toys: Poetry and Technics' (2017). He lives in Los Angeles and can be found on arras.net.

This group of poems is selected from a forthcoming manuscript, “Festivals of Patience,” translations of Rimbaud into alexandrines, preserving the syllabic counts of the originals. Other poems in the series are scheduled to appear in Lana Turner and Fence.

His lustful heart raked, raked again, through coals beneath
his chaste black robe, joyful, donning a single glove,
as he ambled one day, amiable, oh so sweet,
drooling yellow piety from his toothless jowls;

as he ambled one day — “Let us pray!” — an awful
fellow cuffed him roughly, dragging him by an ear,
and hurled a caustic deluge at him, assaulting
his chaste black robe — and exposing his sweating rear!

Now this was punishment! His clothes were unbuttoned,
and a long rosary — exonerated sins —
echoed within his heart. Saint Tartuffe turned ashen.

So, he confessed — he prayed — he shook a death rattle!
Buck naked, wow! — Tartuffe froze like a mannequin.
And the man, self-possessed, walked off with the clothes pile.

SONNET: TO AN ASSHOLE

after Paul Verlaine and Arthur Rimbaud, from the “Album Zutique”

In dark shadows, wrinkled, like a crevassed violet,
it breathes contentedly, silly among the reeds,
still moist with the love it most recently received,
white buttocks coursing from their inclines to its edge.

Filaments straggle like hot wet weepings of milk
which the cruel wind banishes to a life of flight
over small plots of marl that, reddish, in their height,
confuse and distract them — they fall like battered silk.

In my dreams, my mouth was poised just above its abyss;
my soul, envious of physical coitus,
usurped it for sobs — a bottle for tear-tincture.

Aromatic olive — or seductive flute —
chute down which currents of heavenly praline shoot —
a feminine Canaan — bedewed by sharp moisture!

Lo, our asses are not like theirs! Once, I’d peer
behind some hedgerow, see men with unbuttoned pants,
or, as they took carefree baths, watch the urchins dance,
and mark impressions of the function of the rear.

More firm, in many cases untanned, the shape
of the musculature is plain, though hid by tufts
of hair; for women, it is only in the cleft,
deep and charming, where flowers such a satin drape.

With an ingenious and disarming touch, such as seen
in only the finest works of holy tapestry,
a dimple marks the cheek, as in a cherub’s smile.

Oh, to be nude like that! to be drunk with the quest
for joy and rest! turned to a lover’s missile test
— free in the dark murmurs of our sadness — a while!

Animals, in ancient times, while on the go, fucked,
their hopping glands coated with blood and excrement.
Our forefathers paraded their cocks, content
the fold of the sheath, the weight of the package, talked.

In the Middle Ages, women — angels or sows —
sought a well-hung fellow; even Kléber was known
to wield a fine talon, a status overblown
in my mind, but perhaps he had employed voodoo.

Despite that, it’s true: man competes with the mammal.
The hugeness of his dick is the wild beast’s equal.
— Yet, a sterile hour has struck: the horse and the ox

have bridled genital lust, swamped with quietude.
There’s no one left to dance, to frolic in the nude
with children in forests, gamboling amidst the phlox.

projects
his tongue
at pears,

prepares
his stick
— the runs!

While rifles emit their rose-red mists of grapeshot,
whistling all day beneath the infinite blue sky,
dressed in scarlet and green, by a King who coolly mocks
their guts — entire troops disintegrate under fire.

While a terrible madness rages, and makes of boys,
a hundred thousand of them, a smoking junk heap
— You poor dead! in the grass, in summer, in your joy!
Nature! who venerates these boys — and deems them holy!

— There is a God. He laughs at the damask covers
on the altars, the incense, at the golden grails;
he takes a snooze while quaint lullabies Hosanna.

— Then he wakes, when the shy mothers come together
in anguish, slobbering under chintzy black veils.
— Each one shoves him pennies, tied up in a clean scarf!

O, cowards, there she is! Erupt from the stations!
The sun, its lungs afire, has withered with its breath
the streets that, last night, roared with Barbarians.
O Holy City! Jewel of the Occident!

Come! we’ll wait; no need to rush, rekindle the fire.
Here are the quays; here, the boulevards; here, fine homes
arrayed as silhouettes cut from the pale blue sky,
windows that, one night, burst like stars, enrouged by bombs.

Bury the dark, dusty palaces beneath boards;
this frantic, ancient day refreshes your vision.
What’s this? Some ginger-haired troop jiggles their rear ends!
Knock yourself out, folks, be wild — no inhibitions!

drink! when the light arrives, manic, gnashing, intense,
streaming like luxuries piercing your hook-bent spines,
will you not drool, eyes lost in the milky distance,
into your scraping glasses, mute, paralyzed?

Raise one for the Queen, her voluminous white ass!
Revel in the waves of sound: belch that rips through flesh;
on amorous nights, the huffing of pederasts;
morons pirouetting, puppets, dupes, and old men!

Now, dilate your nostrils! Savor the fine vomit!
Drench the cords of your necks in rare, high class toxins!
Placing a friendly hand on your pubescent wrist,
the Poet says to you: “Oh cowards! Be Satans!

Since you insist on rooting, still, in Woman’s womb,
nothing scares you more than an encore contraction,
asphyxiating you, ripping you shrieking from
your infamous perch on her breast, oh blue-balled son.

Syphilitics, fools, kings, pawns, ventriloquists,
why should Paris, the whore, give two gold-plated shites
about your souls, bodies, poisons, rags and beds?
She’ll merely flip you off, you flea-gone parasites.

And when you grovel, moaning, clenching your aching guts,
your sides numb, asking for your cash, vexed, out of it,
that scarlet courtesan with war-befattened bust
will keep a cool distance, shaking her iron fist.”

In those days, when your feet danced in righteous fury,
Paris! and you were knifed, knifed again, wounds twice bleeding,
your back stretched on the rack, yet, with clear eye, you’d glean
a siren benevolence in young, russet Spring.

Oh suffering city, caught inches from the grave,
your head and breasts angling toward a regal Future
accepting your stately limp through its million gates,
city who only the Past could grant a sacred word:

Defibrillated corpse, prepared for cleansing pain,
you drink from wretched life again! you feel rise up
a tsunami of coiled worms coursing through your veins,
icy fingers flicking the wrists of your one love.

This is not a bad thing! Those worms, coarse and livid,
will not stifle your breath of Progress, will blind no eye
any more than the Styx gouged the Caryatids
whose golden astral tears fell from the azure sky.

Though it’s crippling to see you so fouled, overrun
again; though there is no precedent, a city
so ulcerous, pus-drenched, in green nature, not one,
the Poet cries to you: “Splendid is your Beauty!”

The floods have granted you the title: Pure Poetry.
A deep vitality carries you on its crest.
Your works seethe, death recoils, oh arrogant City;
take into your strong heart fusillades of trumpets.

The poet will curb the howls of the Infamous,
the bile of Convicts, the clangor of the Cursed;
his radiating Love will torment proud Woman;
his stanzas will bound forth — see here, see here, you Crooks!